Ruin Academy (Taipei, Taiwan 2010 -) is an independent cross-over architectural research centre in the Urban Core -area of Taipei, Taiwan. The Academy is run in co-operation between the Finland based Casagrande Laboratory and Taiwanese JUT Foundation for Arts & Architecture. 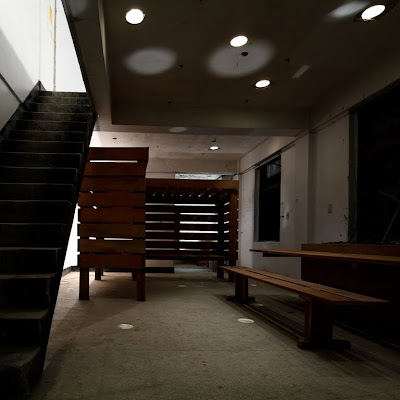 Ruin academy is set to re-think the industrial city and the moden man in a box. It organizes workshops and courses for various Taiwanese and international universities including the National Taiwan University Department of Sociology, Tamkang University Department of Architecture, Aalto University Sustainable Global Technologies Centre and Helsinki University of Arts and Design Department of Environmental Art. The research and design tasks move freely in-between architecture, urban design, environmental art and other disciplines of art and science within the general framework of built human environment.

The Ruin Academy occupies an abandoned 5-story apartment building in central Taipei. All the interior walls of the building and all the windows are removed in order to grow bamboo and vegetables inside the house. The professors and students are sleeping and working in mahogany made ad-hoc dormitories and have a public sauna in the 5th floor. All the building is penetrated with 6 inch holes in order to let "rain inside". The Academy is viewed as an example or fragment of the Third Generation City, the organic ruin of the industrial city.

Without his ruins man is just a common ape. 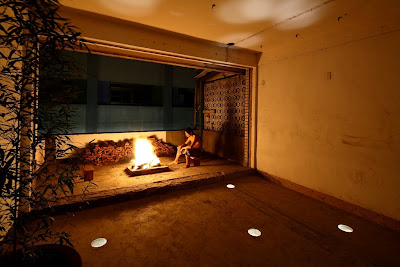 
The Ruin Academy operates with Taipei as the urban case study and with various smaller projects in Taiwan in order to determine the elements of the Third Generation City. Our students/operators are not volunteers, they are called constructor-gardeners. We want to farm a city and treat it with urban acupuncture tuning the city towards the organic. Taipei is a no-man's land being dominated by the official industrialism and the anarchy of the jungle. Ruin Academy joins the urban farmers. In Grandmothers we trust.

The Ruin Academy occupies an abandoned 5-story apartment building in the Central Taipei. The Academy is a constantly changing mixture of a ruin and a construction site. 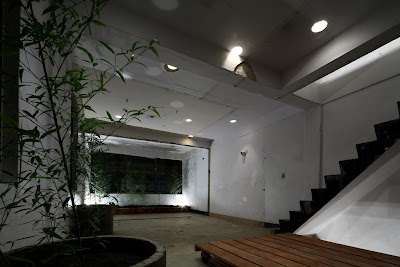 Professor's Deck in the 3rd floor with a moving bed.

ZERO CITY
The Ruin Academy is focused in the research of the Third Generation City - the ruin of the industrial city. The research is done in collaboration with some Taiwanese and Finnish universities, groups and individuals with the Academy acting as a base camp for a series of workshops and individual works. We are a voluntary refugee camp within the architecture community. Architecture moving freely in-between environmental art, urban design, sociology and other disciplines of art and science. Maybe better call built human environment instead of architecture or urban design. Or just human environment.

The 3G city is an organic matrix of nature mixed with human construction. The balance of dominating the no-man's land is ever changing. Local Knowledge knows this. It is light on the surface but with solid roots. A city sweating humanity and constantly wiping the sweat away. The architectural control is in a process of giving up in order to let nature to step in. So far it is not giving up - it is too lazy. Architectural control will be given up. Modernism is lost and the industrial machine will become organic. This happens in Taipei and this is what we study. Ruin Academy is an organic machine. 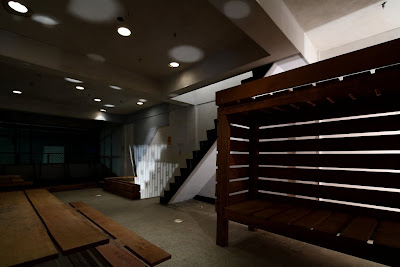 We work 1:1 scale. Ruin Academy takes its commands from the jungle. Without his ruins man is just a common ape.

All the reseach and desing is based on Local Knowledge rather than on official data.

The Ruin Academy is set up to re-organize the industrial city and the man in a box. The workshops in chronological order:

SET-UP
During the first workshop the building was taken back to its basic construction with all the additional walls and even windows removed. 6 inch holes were penetrated through the whole building from the roof to the basement and through the walls. It now rains inside the building watering the frequent plantations of trees, bamboos and vegetables in front of the window holes and in the opened up basement.

Raw mahogany planks and columns are used in the ever transforming rough interior that provides shelter for the Academy professors and students referred as constructor-gardeners. There is a public sauna in the 5th floor. 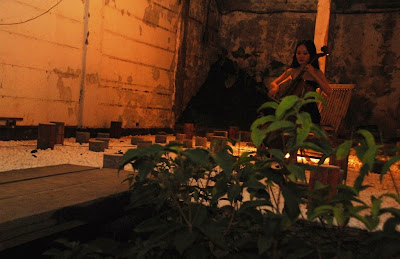 1st Floor, "Archive"
- 6 inch segments of the house on white stones.
- 6 inch holes in the long facade.
- Mahogany bridge over the basement-hole.
- Pile of dirt in the far corner with taro.
- Fire-place. 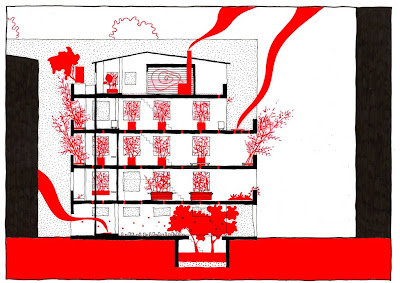 The Ruin Academy is run in co-operation between the Casagrande Laboratory / Finland and JUT Foundation for Arts & Architecture / Taiwan. 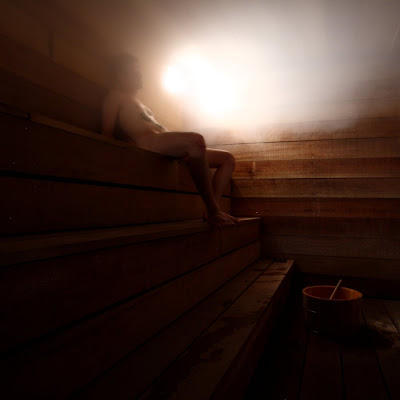 We have the best sauna in the Pacific.

Posted by Urban Acupuncture at 8:39 AM 2 comments: 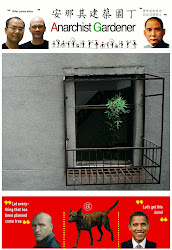 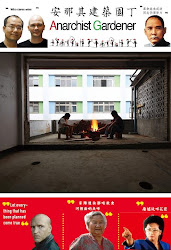 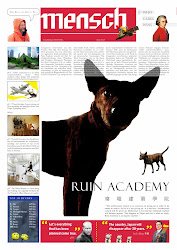 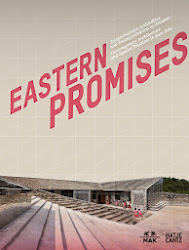